Shipping Up to Nowhere

o boyos, looks like it's been a while no? Lot of stuff has happened; though I suppose you probably guessed that part. I'll go ahead and start with our departure from Kazakhstan.

We stopped working after the 28th and that day was more of a "Goodbye Party" day anyway. It was fun, but we had too many sweets—I had kind of expected the students to bring more savory stuff, but sweets were the order of the day. That Tuesday was one of our guy's birthday, so we had him and a few more students at our apartment for dinner and some movies. We started with Tropic Thunder; a great movie, one I really enjoy. Unfortunately, that was our movie night's high point; the birthday boy picked the next three…and it was the first three Scary Movies—yuck. I could have gone my entire life without seeing those POS. Nichevo (it is nothing). Jake mainly hung out with Zhanar so I was on my own—I built my tank model, got practice making lagman with one of our students. We also had a farewell tea party at the Institute that Friday when we went to get our pay.

I'm not sure why, but for some reason, it seems to be getting harder for me to say good bye. I seem to be getting too easily attached to people now a-days. I was an Army brat for crying out loud; I've gone to six different elementary schools, a junior high, and a high school. I've lived in eleven different houses, six different states, and two different countries—you'd think I'd be used to saying goodbye, by now. I wish I could stop getting so emotionally involved in people that I've just met and may never see again. It really is a pity and it makes things very difficult for me. Don't know what I'll do.

Photos from our last walk home 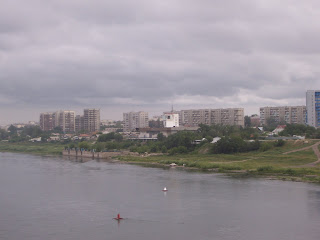 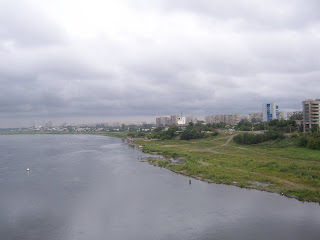 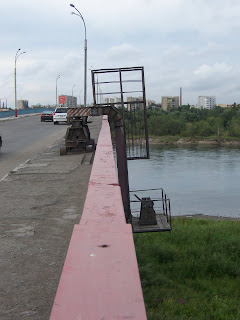 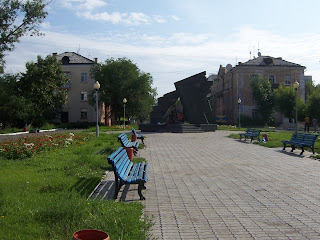 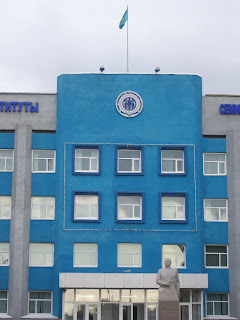 Anyway, we left Semey by train, which was a bit nerve wracking since they hadn't bothered to get tickets for us. Instead we were relying on personal contacts that Nailia had within the train station. I was worried, but they were pretty confident that everything would be OK—but they were right. About three people saw us off at the station, besides Zhanara who was coming with us to Almaty. We got on for free and were given a booth (though it looked for a while like we'd be standing up the whole time). Riding a train is a bit of a crazy experience in Kazakhstan. It is very cramped, crowded, and during the day unbelievably hot. The bathrooms are pretty primitive and dump the contents of the toilet straight onto the tracks below you—so never ever walk by railroad tracks in Kazakhstan. At night (if you can open your windows, it'll get cold and when you leave you have to put the bedding and sheets away. Also, you'll need to bring your own food and drink or be prepared to starve unless you by from the venders at each stop. Going by train takes a long time in Kazakhstan because there are a lot of stops. Another thing is that there are some soul-crushingly flat areas that you will ride through, that are literally in the middle of no-where. Yet, for all these faults, I think I'd still prefer to go by train than by plane. That was pretty scary and with the hassle of luggage in Kazakhstan (especially when you have a lot of it!)

We finally arrived in Almaty and then we spent our one day there mainly in the company of Damy, Leyla, and Victoria, the students Jeff, Mark, and I had hung out with last summer. It was good to see them again and they seemed very excited to be spending time with Jake and I. That day we went up the Kok-Tubeh, had lunch at a popular student café, saw the central square of the city and some other sights of Almaty. The girls gave me a present of a CD from a guy called "Oleg Gazmatoff" since I liked Lubeh, they think I would probably like this guy as well—and so far I think they are correct, I'm liking it. I also met with the Kazakh officer's sister and niece who gave me all the stuff they wanted us to take…which was a lot of junk. I was really worried about the weight, because it was so darn heavy.

The next day we went to the airport and after people attempted to hustle us at the airport, I met the officer's subordinate who took great care of us and got us through all the lines really quickly and completely got us past the baggage weight limitation. It was really cool. I've benefited twice now, from corruption in Kazakhstan and I can see how it can be nice if you've got the right kind of contacts, but I think in the end, the problems it causes way outweighs its supposed benefits.

I guess now you are expecting me to go on a long rant about Kazakh/Russian culture and so on and so forth like I did with Korea. I'm sorry to disappoint you, but it won't be exactly like that. There are a lot of problems in Kazakhstan, but to be so nit-picky seems a bit unfair. Most of my complaints about Korea is because Korea is an extremely well developed country and benefited greatly from US support so I expected better than that from them. Kazakhstan on the other hand is a former Soviet bloc country, which was fed on a diet of Soviet lies and propaganda. It is extremely poor, full of corruption and they're still trying to decided whether Stalin was a bad or good guy (about evenly split in my class). Most of my other complaints have to do with the lack of body hygiene, which sounds very petty to complain about and I don't really know how they can fix it—it just seems natural to me to change my clothes everyday and take a bath likewise. So you won't be hearing quite as much complaining about Kazakhstan ways.

What I will complain about is that the girls can be a little too friendly. For example, take a look at these few pictures (pictures coming soon if not up yet). The girls have got their arms in ours or (and you probably can't tell) their hands around our waist—sometimes they put our hands like theirs for a more mirrored look. Now this just isn't one or two girls, but almost any girl there in Kazakhstan will do that for a picture. It means nothing really, but what are two poor, to put it nicely heavy (to put it not so nicely fat), homely Midwestern boys from Kansas supposed to think? It isn't easy, you know? 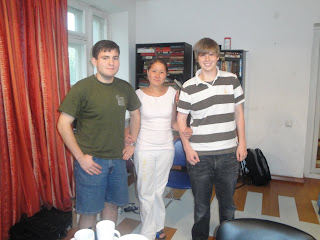 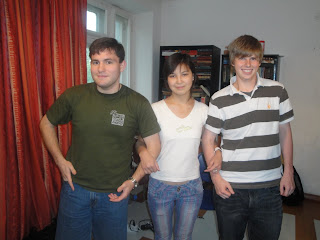 Dr. Lee always says there's something good about Midwestern kids. More responsible, trustworthy, etc. He's really hard on the Korean kids, but he may have something at least in America, I think. I am kind of a fan of the Midwest and her people. We may not be the coolest and hell, some of us might be hicks, but of anywhere I've been the people here are the least boastful and some of the hardest working, I'd like to say. I hate it when people my age knock on Kansas and complain about it so much; I like it here and I'd much rather live in Kansas than some west (or east coast) latte drinking big liberal city. Bleh—if what I've been hearing from people about Obama and people's obsession with him, I'm extremely glad to be in Kansas. As far as I can tell, he still hasn't really done anything yet.

Also, while I'm on politics—why the hell did we get those two idiots out of North Korea? Anyone stupid enough to try to sneak in illegally to a hostile country that is looking for bargaining chips against us deserves to be left to rot, in my opinion. What did we have to give to get them out? They shouldn't have gone there in the first place and by going there, they put America's strategic goals at risk. What fools! If I do something that stupid and a hostile regime is trying to use me against the USA, leave me be and hopefully I'll learn my lesson—I've read One Day in the Life of Ivan Dennisovich so I think I'll be OK to survive in a gulag—I've learned all the tricks, see?

Posted by Alexander "Iskander" Gerges at 7:51 PM No comments:

Well, Today's the last day in Korea. This really bites. I know I'm due for a Kazakhstan update, but right now I'm feeling too down to bother with that.

Yeah, I'm going home to see my family, but for what two weeks? Doesn't really matter that we'll be in the same state, I still won't see them in real life, so what's the difference between 300 miles and 3000? So I don't really see that as a very big plus. Not to mention I've got about 50 pages (not exaggerating: Dr. Lee wants 20 for Korea, 20 fo rKazakhtan, and Dr. Zagorski wants 10 for Kazakhstan) due at school this summer. Coupled with the anxiety from ROTC (which I know'll go badly for me next summer) and all the other problems that I'm not really allowed to talk about with the public, I see no reason to be joyous on this home coming. If I'm lucky the plane'll crash while I'm asleep and I won't notice.


Ugh: Update--left Elly's home and finally arrived at Incheon Airport. Computer is acting very strange and horribly slow, unsure why. I now fully apologize for complaining about the army banning flashcards, I can really see why. All those punks in Kazakhstan who plugged into my
computer gave me the computer equivalent of Aids or the Ebola virus.

Also, am feeling really bad (besides the usual, I don't want to go blues), and I am afraid I caught something because I've got a nasty little head ache and sore joints. Ain't got none of the symptoms of the Mexican Influenza (at least Korea's symptoms). Hope fully I'll be able to sleep most of it off.

Also, I feel terribly guilty at the good bye Elly's mother gave me. Crying and saying how wonderful I was...and how grateful she was that I'd be helping her in the future. God it hurts. I don't even know what to think anymore about it. I feel guilty, because I did treat her rather badly this summer and our relationship failing was both our faults, but it seemed to hit her harder. I just don't know anymore.

Anyway, I'll leave you with a good song--assuming my computer can handle it, God it is sucking atm. http://www.youtube.com/watch?v=-Dxhm9iEfo8&feature=fvw
Posted by Alexander "Iskander" Gerges at 2:11 PM No comments:

Labels: God is Dead, I'm losing it, Korea, OK--I admit it the army was right, Twist the dagger into me deeper

Hey, no updates yet, I've been very very busy.

I'm still alive and having lots of fun in Korea. A real shame I have to go back to school. I'll try to update later; right now I'm at an internet cafe in Pusan.

Later all!
Posted by Alexander "Iskander" Gerges at 11:57 PM 2 comments: