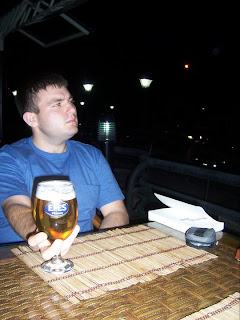 Happy fourth of July everyone. Sorry that the updates have been so freaking sporadic, but even though I've been able to get internet access here, for some fool reason blogger.com has not been working for the last couple of times I've tried it. I can't even get my main page to load up for me, so I"m not sure what the last post I had was. We're on our third group now--the smallest we've had yet. I'm getting ready to go buy tickets to China now. So I have to head out.

OK, I'm back. It's July 6th, now. We had a good Fourth of July here--we played against the kids of our neighborhood. We've played these kids a couple of times before, but we've lost to them everytime. However, this time, I stepped out to let a 14 year old who was much better than I play and our friend Yernur play and with their help, America was able to pull through and win a game of football on the fourth of July.

I think we've got another game scheduled with the kids tonight, this time to ten points, as opposed to five like we had previously. I'm not sure we'll show up, because I made plans to have tea with an old friend of mine at 6:30 and we usually play at 8:00 and today is Astana day--when Kazakh people celebrate the founding of the new Capital of Astana. Jonathan has made plans with some of our students to meet down by the river tonight for a concert and Eric and Mark are going to work out with Yernur.

In our neighborhood we've got our own a great little following of children. It started a few days ago when the kids noticed that there were some Americans living in their neighborhood. We started chatting with them a little bit and one day on our way back from dinner we got an invitation to play soccer with them and that's how we started our almost daily games with the kids. We kept getting our butts kicked, but finally struck back on the fourth of July. So always remember the fourth!

We've started on our third group; they are our smallest--only about eight or nine students. Last week's crowd opened up after a little bit and we were sad to say goodbye. Our students are always wonderful and I've been having them sign my notebook, which is doubling for my journal now.