Update of the 4th of July 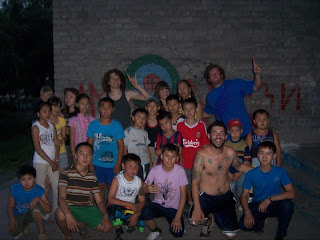 I don't really remember the last thing I posted, but I want to talk a little bit more about the kids of our neighborhood. Now I'm not sure if its the case of us adopting a block's worth of Kazakh kids or them adopting us, but we've got our own personal fan club now. Most evenings we play soccer with the little buggers and the 16 year olds kick our butts. Usually it's the four of us plus one 10-13 year old, to make it 5 on 5. We also play to five. We finally beat them on the 4th of July when I stepped aside to let our good friend Yernur play.

(Yernur is a very strong and serious man. He takes his muslim religion very seriously, as he explains it "When I was young, bad, bad man." It is hard to imagine such a kind soul was ever a troubled youth (and I say that ironically, as he is only 20 or 21 now), but his scars and broken bones (wrist and back from a group of thugs who ganged up on him) seem to confirm it. He is kind of a meloncholy soul, or at the very least a very thoughtful young man, and I pity him for the weight he holds on his shoulders. He wants to marry a "big girl" so as to have a very large family. At any rates, he is probably one of my best friends here. Just wanted to introduce him) 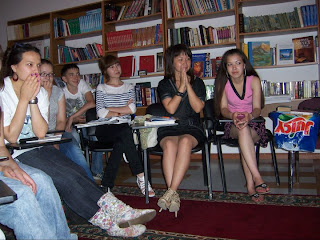 Probably the most touching thing that has happened so far, was after the game, one of the little kids, who played on our side came up to me and gave me an old pin--on it is some Russian words and a hammer and sickle with Lenin in the background. It is unbelievably cool and I got choked up. I hurridly swapped him with my dinky little American flag button and ran inside to grab a coin for him. By the time I got back he was gone, but I explained (as best I could) to his friends to give him it. I also tried to give away my corny Uncle Sam hat away, but when I did, a kid traded me his white "ACTIV(Mobile provider)" hat. I love these kids.We also have a trio of stalkers--a trio of 13 year old girls followed us to the Park city supermarket, followed us their, and then followed us home. That was sunday--on Tuesday they waited outside our buildling and watched to see what apartment we were in and then they scouted us via buzzers to find our apartment #. Now we've seen them following us and one of the girls wears an American flag bandana. They got up enough courage to talk to us(which is how we found out they were 13) but that's about it. Eric says they were trying to flirt with us and seduce us or something--because they walked in front of us and one had a short skirt which Eric said he couldn't stop looking at. I didn't have that problem--but I do have a new nickname for Eric now (Chester Fain.) (Eric if you want me to edit it out I will--it's just in good fun lad).

We have a small class this time around, but they're all good kids. Everytime we have to say goodbye is very hard for us. I wish we had them longer--while I'm at it, I wish we had days off, no more greshki (I don't know the spelling, but it's pretty bland Soviet Era food), more air conditioning, and plenty of other stuff. BUt still I'm enjoying myself.

We're having a small bit of a problem--dare we call it a mutiny? Based on a misunderstanding about the pay and working conditions, but hopefully we can solve it without any serious problem. If not...well; I guess part of being a leader is trying to work something out between parties; even if I don't really get taken that seriously as El Presidente.

Miss you guys, but not ready to head back from Kazakhstan. LIstening to Warren Zevon and Old Blind Dogs. Life is good 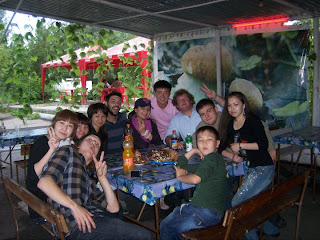