So I sit here, apparently poised to enjoy my most expensive meal to date, here.  I'm at a place called        "The Yard House Pub" (no relation to the one in the US, I don't think, but it's quite nice). 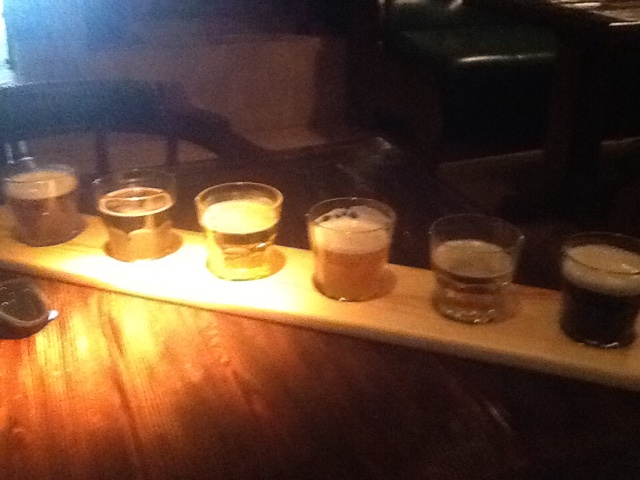 It  kind of appears to be a typical sort of "pub"y place, wwwith a very dark interior a lot of wood and some barrels sticking out the wall.
This beer tray is called "a yard of beer" which lets you try 6 types of their draught beer for 1500 Tg, which is a little under $10 (185 being the current rate to a dollar I believe).  I chose (from right to left) a Guiness, a German beer called "Hacker Pschorr", Paulaner (Weissbier), a Belgian beer Romy, a Czech beer--Praga dark Lager, and an English ale called "Abbot".
For reference I'm using the A-F scale familiar with American educational systems.  A is Excellent, B is Above Average, C is Average, D is Below Average, and F is Budweiser--I mean fails.  So if something gets a C or low B, it's still a good beer, but nothing to crow about.
I'm  starting with the Hacker Pschorr as it appears to be the lightest and it is fantastic.  Honestly it looks like a light beer, like Bud light or something like that--so clear and yellow, but oh my goodness.  I don't think I've ever tasted a light beer quite like this.  It just has so much flavor in a little light colored beer.   It's quite light (obviously), not very hoppy at all, but a hint of a fruity taste.  Definitely an A+.
Next I think I'll go with the Romy as it is the next lightest in color.  I'm writing this faster than I'm drinking my beer however and the food has come before I finished the Hacker.  I want to savor it--it's so good. 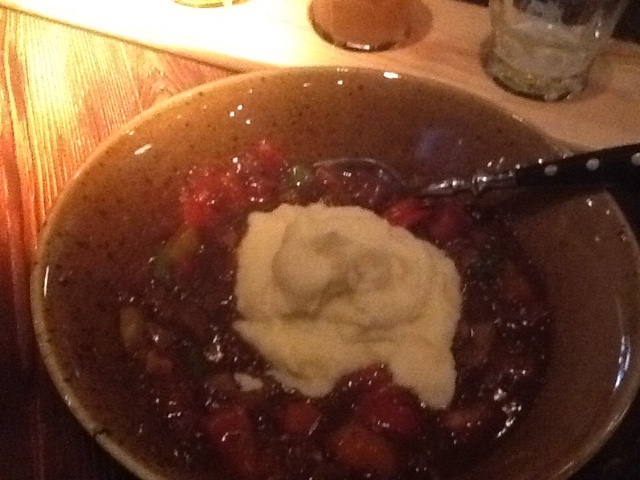 I ordered an Irish Stew (about 2500 Tg, so $13.50).  It isn't  a whole lot of soup disappointing, but it tastes really good. It isn't really that much of an Irish stewy flavor though--there's some stuff I've never seen in an Irish stew in the US--tomatos, red and green peppers.  But the taste is great--if I didn't know it was an Irish stew, I d think it was just a really good beef stew.  The beef in particular is very tender and flavorful (but so far I've only found two pieces of beef).  Really enjoying it-- A-: just because it isn't what I was expecting and I kind of was hoping for more for 2500 tg.
Now I'll start with the Romy. It also is pretty light, but a little bit less flavorful than the Hacker, but far superior to a comparable looking U.S. light beer.  A solid B.  It would probably be higher if I hadn't had that Hacker first.
Following the Romy I'm going with the Paulaner, since it's  a weissbier, before I get into the ales.  Self disclosure--I'm not a huge wheat beer fan, so i"ll try to be as fair to this as possible, but of course because this is personal taste that's just an occupational hazard.  In the light here, it's got more of an pale yellowish color and kind of a cloudy consistancy.  Surprisingly it doesn't have that much of a "wheat" flavor--I kind of assumed Weissbier was wheat bear because of the color, but I could be mistaken.  Unfortunately I haven't asked for the Wifi password yet, so I can't be sure.  It's not bad, very mild flavor with a hint of the "wheaty" kind of taste at the end.  C- If I had to have a wheat beer I'd take a Boulevarrd Wheat or Blue Moon, honestly.
Next is the Abbot Ale.  This beer I'm kind of excited about--in the light and with the stained color of the wood table it looks like amber.  But at first, I'm not really impressed. The flavor is mild and nothing fantastic.  But as I swallow I get a hint of an aftertaste that kind of intrigues me.  I take another sip and it's the same--first taste is just "eh, a beer" but then there's this aftertaste of ale that I really enjoy.  I'll rank this one as a B-.  I really like the aftertaste, but it's so mild you almost don't notice it.  I could definitely see this beer growing on me and pushing up the score after I have a few.
The penultimate beer is the Praga Dark Lager.  Not sure what to expect--I chose the dark lager over the Pils because I had so many other light colored beers I wanted to have a nice color palate.  Praga is very strange.  It's dark brown, almost black in the shadows, but when there's light it's just a dark amber brown.  It's kind of sweet, really not what I'm expecting.  The sweetness is a little off-putting for me, so I'm unfortunately going to have to give it a D.   Just kind of underwhelming and odd.  I'm actually a little torn if I should give it lower or not--I mean I'm not really wanting to even finish it, but at least it has flavor (even if it is bad) which I think kind of gives it a leg over Bud or PBR.
And lastly, Guinness Draught.  Not much to really say--it's so ubiquitous what can I add to it?  It's black, but I guess because I've taken so long to drink the other beers the head is almost gone, but there's still a tiny bit left.  Flavorwise?  It's Guinness.  if you like Stouts, you'll like Guinness.  If you don't like Stouts, you won't.  I've become a bit more of a fan of Porters lately, so I find stouts a little more bland, but It's Guinness.  Definitely a B+.
So that about wraps it up here.  The atmosphere of The Yard House is nice.  They've got a lot of TVs showing some soccer game, all the furnature looks "antique" but is clealry new.  So honestly it just gives a feeling of quality you don't always have here in KZ.  That's also probably why the prices are so much higher than places I normally go--I don't care too much for the frills.  The music playing is pretty good--kind of a classic rock/alternative playlist--I heard some Billy Joel, but that was the only artist I recognized, but there hasn't been a song that actually bothered   me, and quite a few I kind of liked.
Biggest issue rightt now is since I got my food, I haven't seen a waiter so getting the check and seeing about the wifi password is taking longer than it really shoold--I think there's just me and maybe the bartender here  But I'm not sure if he is or not.
Looks like I finally got it.   Total with tip 4400 Tg, so $23.78.  Quality of food I'd rate the same as in    US, beers were all import so I think that $9 for 6 test glasses seems reasonable.  Only thing is I'd be happier with the Irish stew if it was more like  $10.  It just didn't seem like $13.50 worth of food.  But that's about it.  I like this place.  I may come back here--definitely would if I had friends in Almaty who liked beer and didn't mind a bit higher prices than normal.
On my own--I don't know if I'll come back.  If this was a US restaurant (the prices are) it'd be a no brainer--heck i'm still interested--here is a sausage place for 2500tg of horse sausage, so who knows?  But I mean, I can get a plate of lagman for 650 tenge and .5 l of Pislner at Tashkent for 350 tenge, so this place has definitely hurt itself catering to me in particular because of the prices.
Posted by Alexander "Iskander" Gerges at 4:41 AM