Sorry about not updating for a few days--I've been a little bit tired.  So, two days ago, I had a chance to explore a little bit around Ha Giang city with some of Thuy's students.  They're pretty nice, about grade 10, so I think around 15-16 years old and their English is pretty good.  One issue I'm having though is that they tend to be very soft spoken, so outside it can be very hard to hear people because of all the honking on the street.  I've noticed that even when speaking in their native language, Vietnamese people talk a lot quieter, than say the Chinese.  Actually, this is a huge relief--one thing I found really, really irritating when I visited China was how loud everyone was when talking and how the mandarin sounded like jackhammers in my ear.
Here's a few of the sites around Ha Giang. 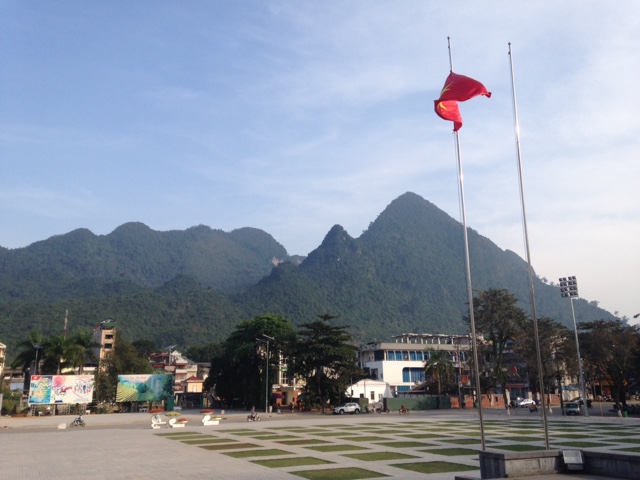 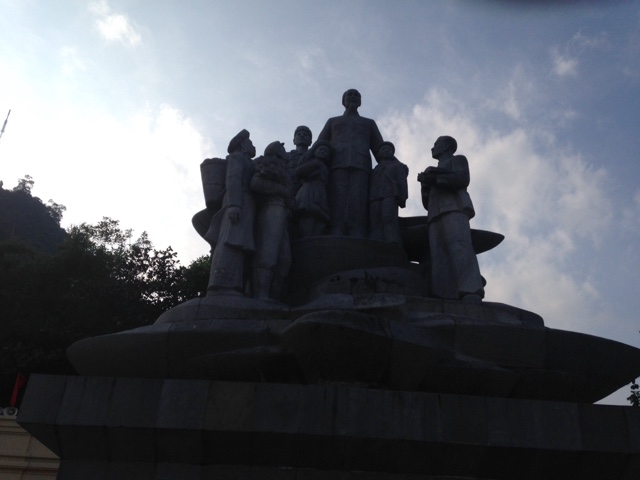 That night we had dinner at a restaraunt that specializes in chicken.  We had boiled chicken and then some fried chicken. 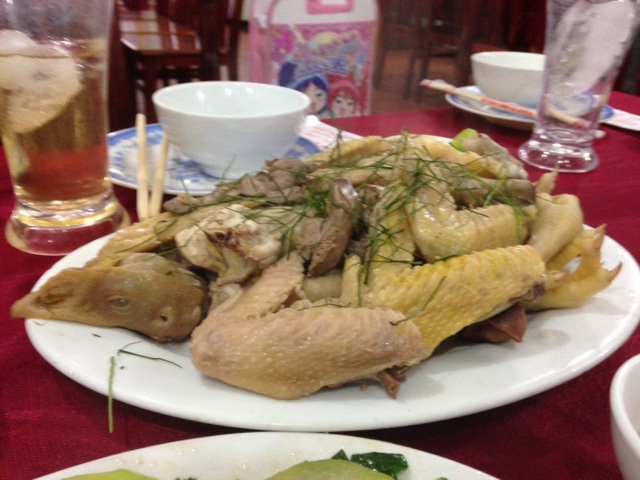 Luckily, I can't say this chicken was smiling at me.
They had fish sauce and some salt with lime juice.  A lot of the food is meant to be dipped--though I find things get way too salty that way.
I'd also like to note that this place would not be popular with PETA: 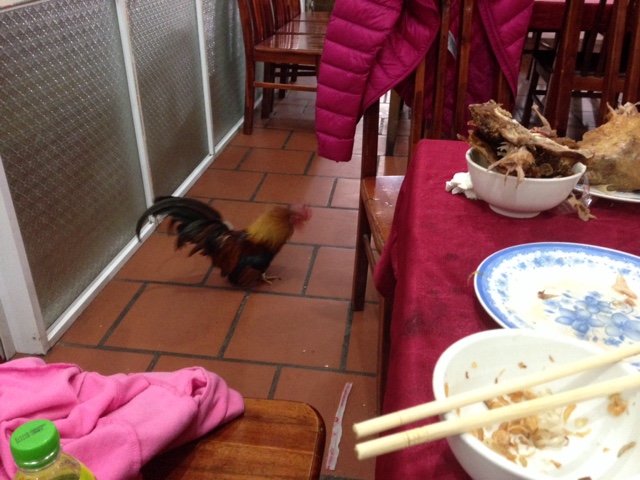 I talked with the students for a few hours afterwards and then came back and went to bed.
The next day, Thuy came by and we had to go to the police to get premission to go further north because we're so close to the border. 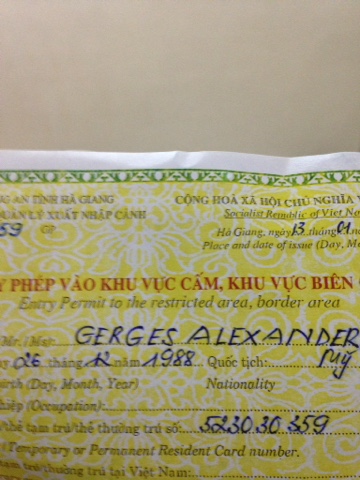 After we got that sorted out, we headed up to the Dong Van Geo Park area.  It's up in the mountains and the road up there was windy and rather narrow.  On the way up there we stopped at a temple that was poking out of a hillside.   It was a steep climb, but the view was pretty interesting from the temple. 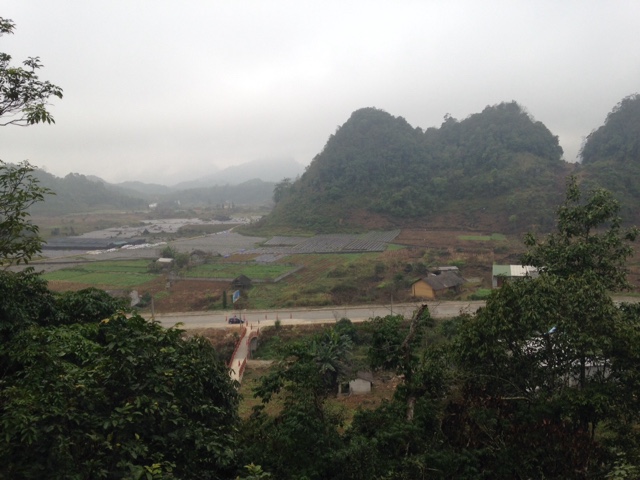 Afterwards, we headed up further into the mountains and saw the twin mountains.  Which were actually more like hills.  It was hard to see them though, through the fog--we had to wait for a break in the current. 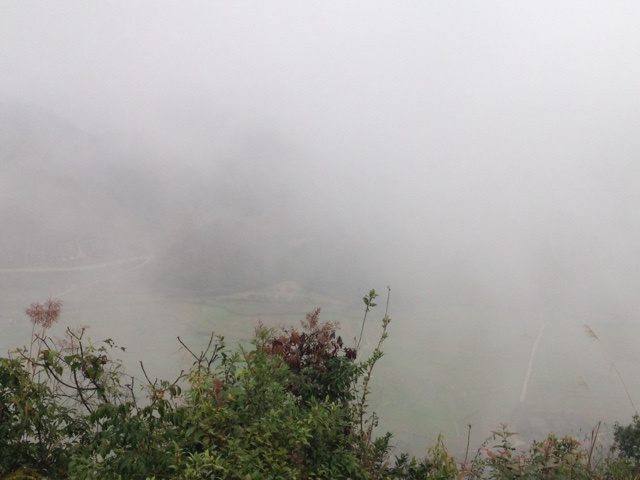 You can barely see them from here. 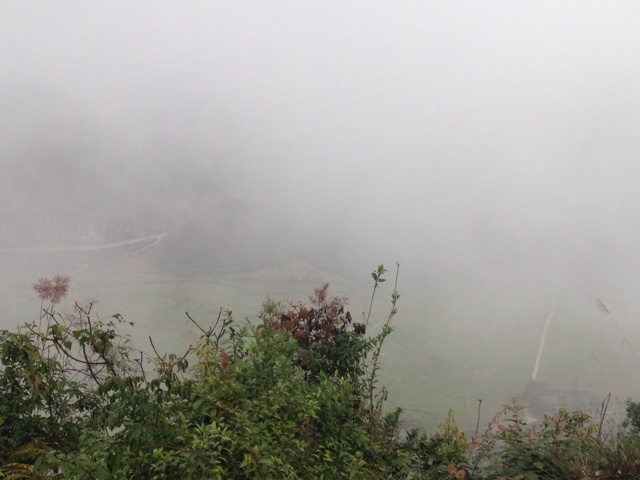 We descended from the "Heaven's Gate Road" and headed to the market in the nearby town.  It was smaller than the market in Ha Giang, but it was still neat to see all the meat and fish on sale.  While we were there, we ate some rice-cake snacks.  One of them was like those bean filled rice balls Sarah likes, but bigger. 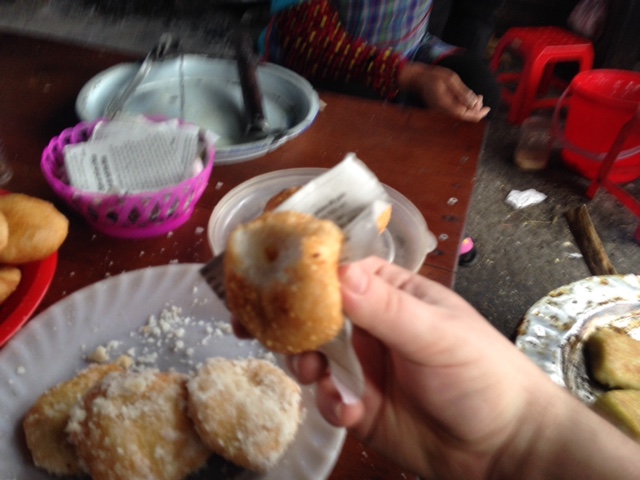 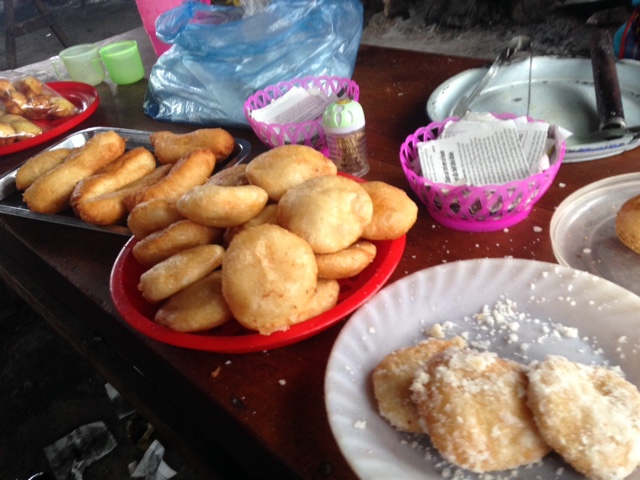 Once we'd eaten, we got back into the car and drove to the entrance of the Lung Khuyu Cave.  It was a 2 kilometer path from a village, which didn't seem too bad on the face of it--but turned out to be a real butt-kicker. 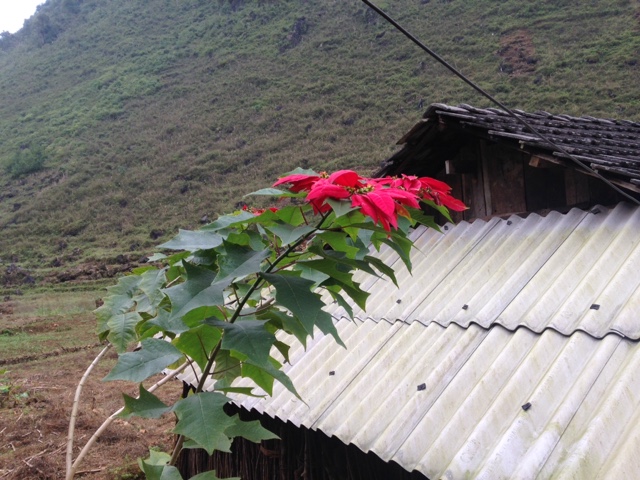 I did see an interesting plant--the red on the top are leaves--just leaves.  Really odd.
But seriously, this path sucked, but I saw some great views. 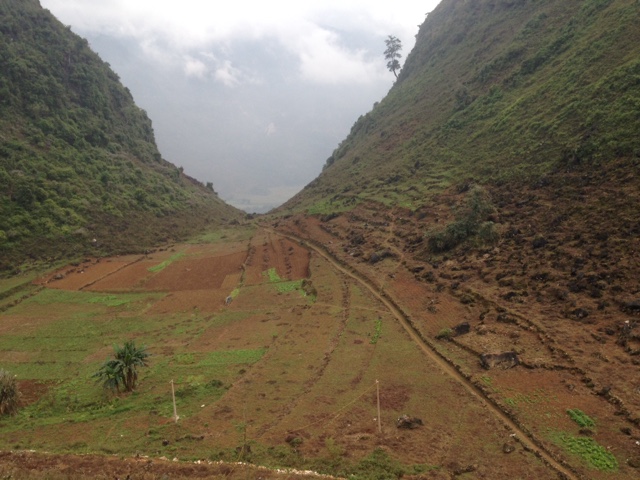 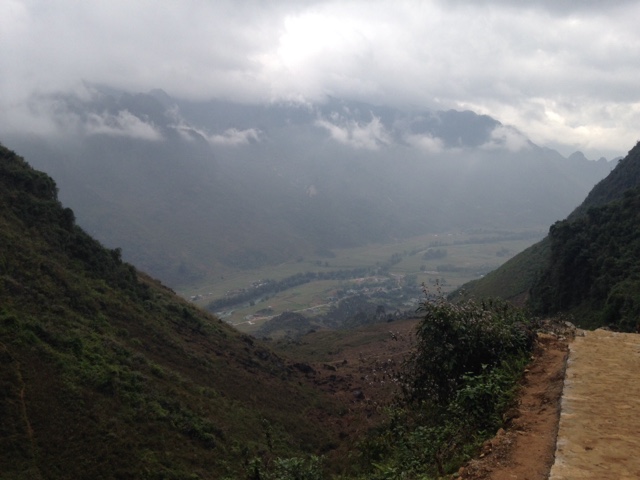 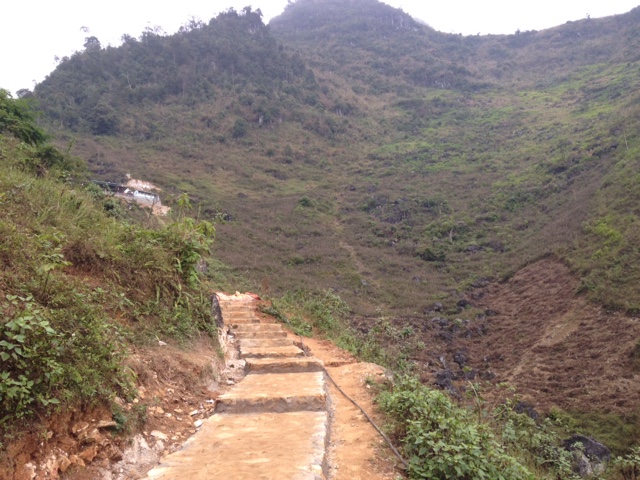 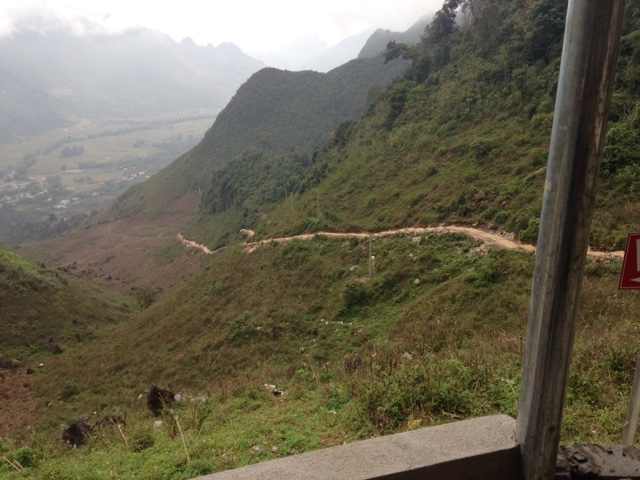 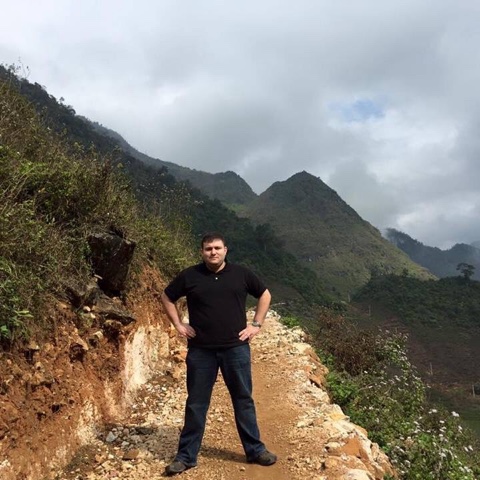 The cave itself was breathtakingly beautiful,  but unpleasantly humid and warm. 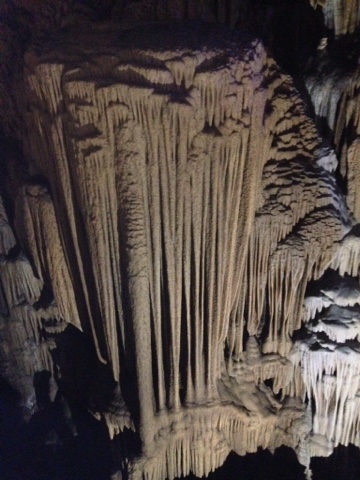 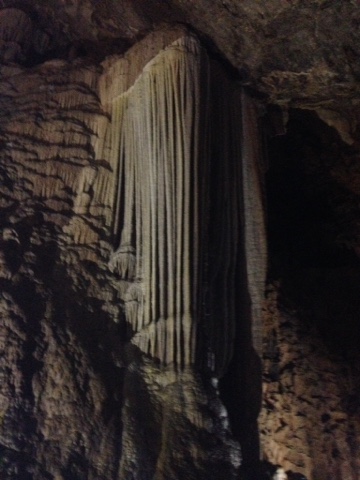 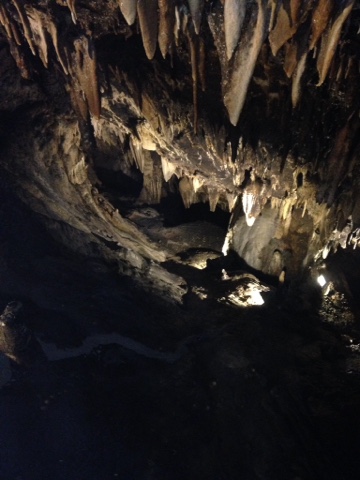 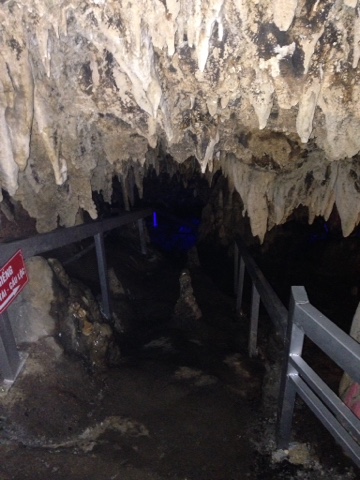 I had a great time, but the trip kicked my butt.  On the way back, we stopped by the Chinese border, where I picked up a set of Chinese chess (for like $1.25) and one of those old fashioned safety razors for my WWI impression ($1.5).
Today's my last full day here in Vietnam, though that's not 100% accurate as my flight leaves tomorrow at like 1140 PM.  (Small aside, I don't get why my boarding pass doesn't use military time--it actually said things like 1000 PM and 1140 PM.  Which is fine, but one of my passes didn't print the PM so it said 0600 and I thought I was going to be at the airport all night-but they meant 0600 PM.  Still, it's needlessly confusing.)
Tomorrow, Thuy will be busy, so I'm going to the bus station myself-where I'll be finding one of those sleeper buses (actually she said the cab guy's help me get my ticket and make sure I'm on the right bus) and then I'm getting in touch with her brother to help me get the souvenirs I left there and head to the airport.
I've had a wonderful trip and I hope I'll be back someday!
I'd like to make a small point-I'm geo-tagging these posts, but I have no idea where I'm actually saying that I am.
Posted by Alexander "Iskander" Gerges at 7:48 PM