Alternative title: Still haven't found Charlie.
Slept all right--though the hard mattress ensured that I woke up a few times during the night and was a little bit stiff this morning.  Still, can't complain too much.  Had some authentic Vietnamese "pho" for breakfast today.  I don't remember if I mentioned it, but I found out that when you say "pho" with an o, it means street, but with the "uh" sound it is the food.  I was confused earlier because it seemed that there was some strange advertising strategy with all these street signs saying "Lan Troc Pho" and I figured I had vastly underestimated the popularity of pho.
Today we went to Bat Trang village (spelling is probably butchered to hell) a village famous for its pottery. I rode on the back of a motorbike.  Somehow there seems to be an understood method of communication--you honk, then you do whatever the hell you wanted.  Signaling is optional and apparently not recommended.  We took a pretty interesting route to the village--across an old French railroad bridge, which apparently had a system where you drove on the opposite side of the road like in Britain (this too is apparently optional--we saw a couple guys going against traffic--but honk and all is understood).
Bat Trang is pretty well known in Vietnam for its pottery and has a long tradition of selling it to Hanoi and places like China.  The pottery was very impressive--a lot of it was very similar to Chinese porcelain, the white and blue kind, but they also sold many other kinds.  I personally liked the earthy looking ones and they also had some plates and paintings on them--some of scenes of life, others of Vietnamese leaders (Ho Chi Minh and Vo Nguyen Giap were the most popular).
I picked up a few souvenirs and stuff was pretty inexpensive (I think).  I still haven't been to an exchange yet, but I was able to give Khai $20 for some of the stuff I bought and he got a few things that I plan to give to the Gerges cousins.  At Bat Trang, we had some milk from a coconut--the big green kind with a straw sticking out of it, and some sweat potato cakes.
We went back home and I took a nap--but I did help with dinner. Well, I boiled some broccoli and cauliflower.  But I helped!  This was completely negated because during dinner, I was so bad at rolling the stuff, they all felt bad enough for me that they rolled stuff for me.  I think I would have been better at it, but since dinner is always on the floor and I'm not too good at sitting cross legged, this makes things more of a challenge.
Tomorrow we plan to visit the Museum of the National Revolution.  I'm excited to see that and I hope that I'll be able to get to an exchange and I can find some nice souvenirs for the boys.
I forgot to mention, outside our apartment there's some fields where people farm.  I think they're cooperatives for the apartments, but I had a chance to walk through them and see what people grow here. 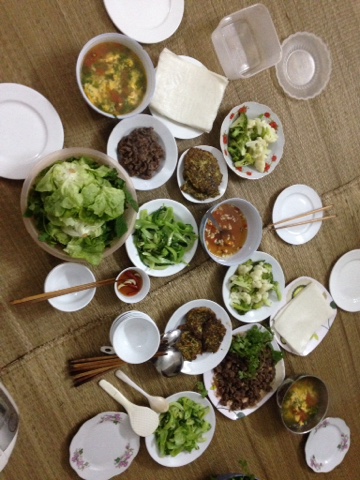 Posted by Alexander "Iskander" Gerges at 5:52 AM