Thoughts on the Korean Mourning process

Its been a while and there's a lot to catch up on. Before I do my trip I think I'm going to talk about an event that's pretty well known through out the world.

As I am sure you are all aware, recently the former president Roh committed suicide. You are also probably aware that he was under investigation for...

Accidentally hit post, but I'm not ready yet. I'll update this later. To hold you over here's a photo of me in North Korea. 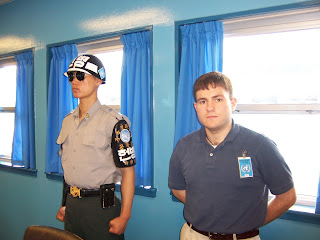 To the left of me is a ROK Guard and South Korea. I am standing across the line of demilitarization; I.E. North Korean territory.