Furious and despairing and trying to catch up

Now that I've had a bit of sleep I'll get back to what got me so riled up last night.

So we went to this island yesterday that was basically naught but a huge garden. OK, whatever, not my cup of tea. I mean it wasn't horrible, but you know there's only so many plants you can look at in an hour and a half, especially on such a small island. 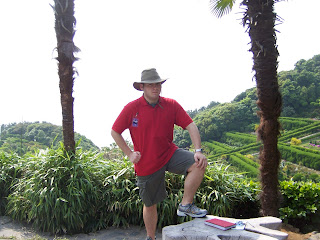 Well, of course the girls loved the thing and were gushing about how great it was, but when we got ready to go to the POW camp, oh did they moan. "Do we have to go?" OK, I get it, you are girls; history isn't your thing. But was a garden island mine? I never complained while you were in earshot, why do you have to drag me down, eh? No matter, I guess, just keep trucking on and trying to ignore them.

The museum of the POW was pretty cool. I think it has fallen into a little bit of hard times, but the old girl still has some life in her, I think. I love the giant T-34 that you go into to enter the museum 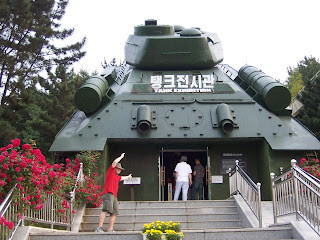 , nice little touch methinks even if it is a bit drab on the inside. However, I knew that this was going to be a delicate situation to handle, since we have 5 members of the PRC, including one son of the vice governor of that region that had that nasty little earthquake. I expected though, that we'd all get through this, but I don't think the confrontation with the doctrine of the party was good for Hai-Xiao. After he saw some parts about how the POWs were treated in accordance to the Geneva convention he got mad. I was walking by an exibit about the POW rising and I heard him talking to Ross (an American) in our group saying "The American army has a history of beating prisoners."

Wonderful, more conjecture and stated facts from a guy whose national army's biggest operation in the last twenty or so years was murdering its own people. Mabye a cheap shot, but this is from the same guy who claims that the American government is lying about Iraq, because he saw a video on the Chinese website of an American marine saying he thought a figure in the distance was an enemy combatant and it turned out to be a child. Or that there was that instance where the marines murdered the family and raped the little girl. Horrible stuff does happen, but in America those things are reported and people are punished.

Not like China where the people aren't allowed to ask the government why their children's school collapsed but the government office next door was still standing. Or where certain histories and websites are forbiddon...I'll never understand how in China they can trust their government when they accept that it is corrupt, authoritarian, and repressive over a government that is open, frequently being challenged by the press (doesn't sound like a good thing, but think about it-it means that the press is free enough to criticize) and purely from the historical stand point, it doesn't hurt their case that neutral parties who were allowed to inspect the camps (unlike the Chinese hell holes they put our soldiers into) disagree with the Chinese Government's "history".

/Rant mode off, it took a lot of my will power not to punch him in the back of the head at that very moment and it took even more not to smack Ross when he said "When have winners ever been honest about history" without going into how much that made me mad, I can assure you it did. Chao, the other chinese guy wasn't much better; declaring it all to be "Bullsh*t." 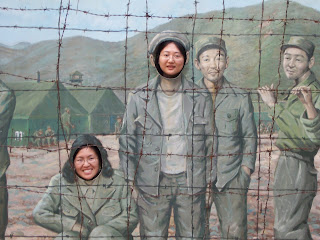 At least the girls showed a bit more restraint. I figured they couldn't have like that stuff any better (or maybe they just didn't care; international student girls, much like American girls never seem to care about history).

So the communists were a serious drag at this trip, and finally made me just decide there's no point in even talking to these people. If they can buy what they're government is telling them, even after what they've seen in the US and they can ignore the rest of the world to go with their government then there isn't any way I'm going to convince them otherwise. An article I read in the NY Times recently talked about how the Chinese are willing to accept the repression of their government because of the progress and modernization. I guess that's their business. It starts to bother me however, when Hai-Xiao says they want confrontation with us and are preparing for it, it does worry me. I can't believe these are the people that are going to surpass us. I also can't believe what some of the Koreans believe about us, their allies who kept them from speaking...korean with a northern accent, but that is another story...

We only had 45 minutes at this museum, half the time at the other island, but as soon as it was 39 minutes those girls from earlier started pushing Dr. Lee to have us leave. "Can't we go already?" I had to freaking run up and down the rest of the camp to get photos and I still was running behind. Those jerks rushed us out of there on the most historically interesting tour we had yet been on.

To end this whole sorry affair, we were trying to get dinner sorted out and we were planning on eating at McDonalds to save time...but Dr. Lee found out from our Korean guides that there was this "terrific" place that made traditional Korean cold noodles and we could do it, if the group wanted. The chinese students got extremely excited, because they had had this before, but before we could say anything, the back half of the bus shouted "No!" "I really just have to have a burger"

WTH. This group has been complaining about Bulgogi...what kind of people are they? What is wrong with them? We've eaten at American fast food restraunts five times now, six tomorrow and we've had plenty of options for individuals to eat there....and we've been out of the states for what a week? And you are already freaking craving burgers? Unbelievable...just unbelievable...
Posted by Alexander "Iskander" Gerges at 3:52 PM

Labels: Chicomms, I may lose it with this group